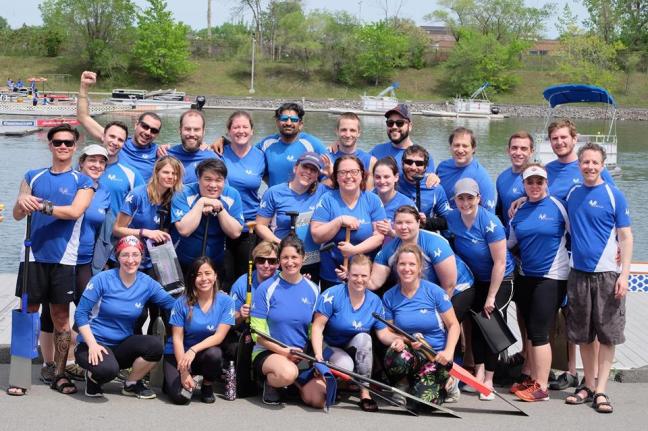 Paddling season has started back in full force (pun intended ;)) with the Verdun Dragon Boat Club’s four competitive teams gearing up for the first trifecta of the Triple Crown; the H²0 Open!

As weather forecasts fluctuated between inclement weather, rain showers and sporadic clear skies, we all crossed our fingers that the dragon boat deities would smile down some sunny weather.

Alas it was not meant to be, and the full first half of the races were competed in the pouring rain! Ah, such is the reality of an outdoor sport.

Paddlers valiantly warmed up between the raindrops, boarded their boats, and set off to break some new timings for the 500m races of the day, cheered on by their comrades huddled under the Verdun DBC tent.

Verdun’s competitive Force team has the Pan Am Dragon Boat Federation races (March 2019 in Trinidad and Tobago) on their radar, so with the recent shift to small boats instead of the standard 20-paddler boats, opted to race in the 10-paddler vessels. What a difference that was! Balancing in precarious smaller boats which are more susceptible to changes in waves or wind, it took a lot of preparation on the part of Coaches Ira E. Lax and Sheri Cameron to find the optimal paddler line-ups.

And these races were against some pretty serious contenders, many of whom had either competed in or were prepping for Nationals in Hungary. The fact that Verdun’s teams held their own against such top athletes said a lot about boat connection and paddler effort.

Verdun Women: “We May be Pretty, but We’re Tough!”

With fierce former Nationals paddler, Coach Sheri Cameron, at the helm, they sliced a full 70 milliseconds off their best timing, going from 2:37,89 in their first race to 2:37,19 in the final heat. And as we know in racing, every second counts.

While Verdun Women didn’t place in the final heat (although they came in first place for the first race!), the final race was elegance and athletic prowess personified! Video footage shows a strong start and steady creeping up on the other teams, matching them, and then shooting ahead with power and connection, finishing a full boat length’s ahead! As paddler Petula Jurasek commented, “We may be pretty, but we’re Tough”.

Verdun’s competitive men’s team, Brute Force, showed some true stride in cutting a full three seconds off their best timing, incorporating Coach Ira Lax’s feedback of “Slower, but longer strokes”. Improving their race results from 2:34,11 to 2:31,86, the blue and white team colors of Verdun were worn with pride!

The Epic Race- Force Vs…. Force?

And speaking of blue and white…

With the challenge of trying to fit Force paddlers into smaller boats, it was decided to register Two teams of Force, Division White and Division Blue, to allow more to have a chance to paddle. Each mini-team cheered one another on…until the second race. 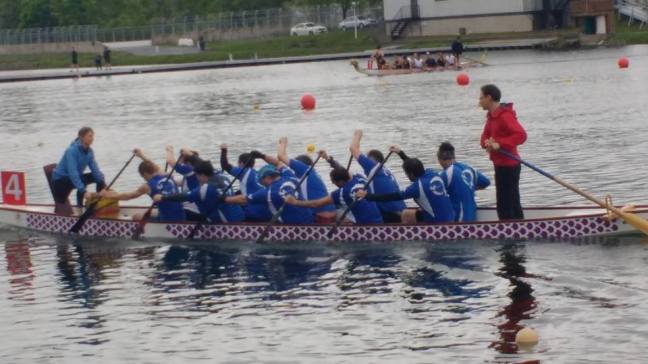 The  sun surprised all by arriving mid-day, just in time for the second heat. And that’s where the drama began.

Due to their comparable timings, Verdun’s two Force crews would be racing…against one other!

Eyeing each other with mock aggressiveness, the two divisions warmed up together. But once they boarded their respective boats, it was all business.

Steered by Coaches Sheri and Ira respectively, the Verdun White and Verdun Blue each beat their timings from the first race. From an initial 2:35,43 to a respectable 2:33,08, the lighter Verdun White boat jutted out from the start line with an impressive start, maintaining a good lead relative to the other teams. Verdun Blue kept pace, and at the end, shot ahead, pushing ahead of their teammates at the final buoy.

It was a great bonding experience for Verdun’s paddlers, many for whom this was the first race.

United once again as Verdun Blue&White, the club engaged in their second favorite past-time after paddling: some serious chowing down at the post-race club potluck.

Community is the name of the game at Verdun, and the sense of camaraderie, support, cheering on fellow paddlers, and exchanging tricks of the trade can be seen at all practices and races.

This site uses Akismet to reduce spam. Learn how your comment data is processed.